"... when you take the remark in the context of the campaign and everything is taken in context in relationship to something else ..." (Marsha Blackburn)

Athens was a state run almost entirely by amateurs. There were no professional politicians; no professional lawyers or judges, no professional civil service. The people could do what they pleased and, during much of Athenian history, whenever they wanted to do it. The Athenian people could vote one day to raise taxes by 50%, one day to cut them by that much; they could outlaw something one day, approve it the next; give citizens of Athens a right one day, take it away the next. This all must have been terribly inefficient. There was no constitution to keep them in check, and no lifetime judges to tell them what to do: a right you had one day could be taken away tomorrow. All this resulted in certain problems of stability; and, as we will see, the Athenians themselves took certain steps to limit the instability of their government without compromising its direct connection with the people. We can learn something from the strain between direct citizen involvement, on the one hand, and stability on the other. Americans today often feel that the government is a big them off in DC; we often think that the cure is more citizen involvement, and this must be right in an important sense. But a more direct form of democracy--even if it were possible in a country as large and diverse as our own--would also bring along problems not unlike those faced by Athens. Beginnings of Democracy (David M. Johnson) 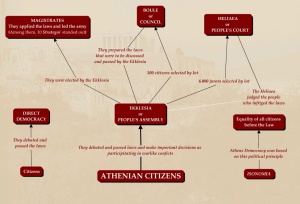