The Rise of MOOCs

Are MOOCs an idea that were floating around the halls of universities for some time now, or was the first one in 2008 really a watershed moment?

Many of the ideas that go into a MOOC were around before CCK08 but that course marks the first time the format came together. In particular, we would point to David Wiley's Introduction to Open Education course, which was offered as an open wiki (later called the Wiley Wiki - see https://sites.google.com/site/themoocguide/cck08---mooc-basics ) and Alec Couros's open course ECI831 - Social Media and Open Education (see https://sites.google.com/site/themoocguide/social-media-and-open-education ). These two courses were of course influenced by other work in the field - the concept of open education, in which Wiley was a pioneer, with a license preceeding the Creative Commons licenses, the open wiki, which of course was made famous by Wikipedia, and more.

What makes the MOOC offered by George Siemens and myself different was that it was a distributed course. This is what enabled the 'massive' part of 'Massive Open Online Course'. The software developed to support the course - called gRSShopper, written by myself - was designed to enable the use of open educational resources (OERs) and to aggregate student contributions written using their own weblog environment (and later, discussion boards, Twitter, Facebook, Delicious, and more). I've been working with aggregators since the beginning of RSS and of course have been influenced here by the work of people like Dave Winer and Aaron Swartz, among many others. The OER movement itself has roots in the open access movement, which created the Open Archives Initiative, and eventually the UNESCO OER program.

What made CCK08 a watershed moment was the realization that the use of distributed open resources would support - with ease - an attendance in the thousands. We weren't expecting 2200 people in CCK08; George Siemens has quipped that we were expecting about 24 people, if we were lucky. After all, the course was devoted to a pretty obscure topic - the theory of Connectivism, a pedagogical theory articulated by George and myself. And the software and course design were the first to explictly invoke the theory, and to focus on connections rather than content, which suggested the distributed and connected approach. 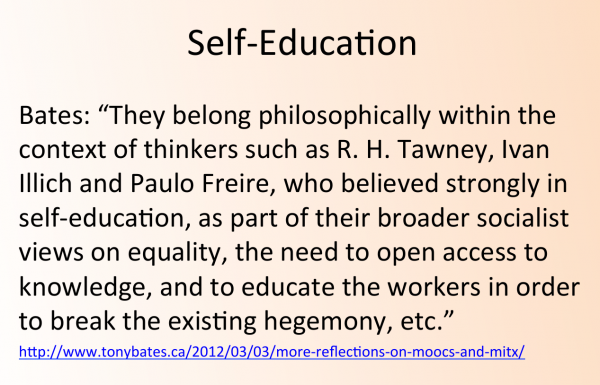 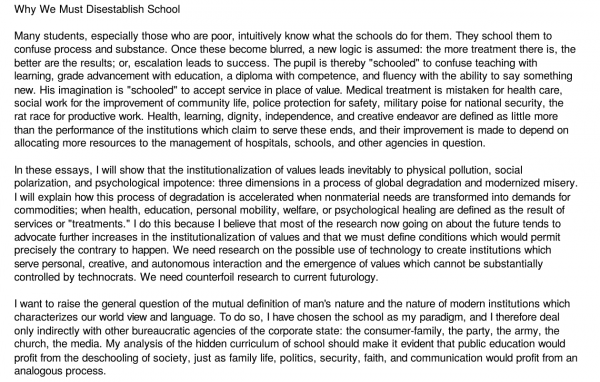 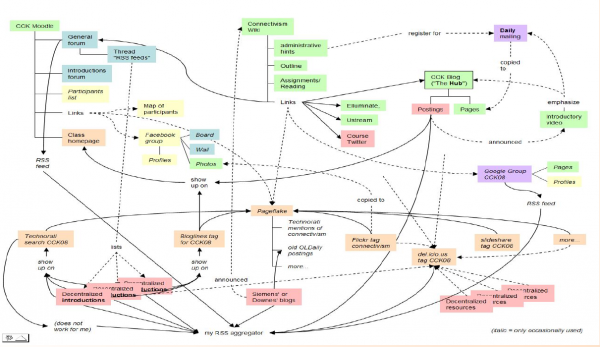 Stephen Downes The LMS and the MOOC

"want to know about something?"

"However, MOOCs themselves are highly dependent, as Stephen acknowledges, on students already having a high level of understanding and an ability to learn independently, and to think critically. This is exactly what good quality formal education should be doing: developing and fostering such abilities so that learners can participate meaningfully in MOOCs and other forms of self-learning. Although there are still too many barriers to formal education, nevertheless there is much more access now to higher education than in the days of the socialist thinkers that spawned the adult education movement. Many students do need help and support to learn, which is why the demand for formal education programs has never been higher.

In this respect, I am quoting from someone who must remain anonymous because of his position as a senior administrator in a postsecondary institution:

A new educational paradigm? MOOCs are totally open for everyone who has access to the internet and enough time to participate. So far so, good. But who will benefit? It seems that those who meet the standards of discussion and the hidden requirements [of the presenters] can exchange and enhance their knowledge. Those who will not reach the academic level set by the organizers will remain lurkers who can only profit in discussing with the those in the crowd that can argue at the same level. But they cannot increase their skills. What’s that good for? The courses silently separate the elite from the mass. It looks like democracy but is quite the opposite of [real] teaching. Education normally tries to help people to enhance their understanding and make up their minds. MOOCs don’t take care of this. They are a non-educational approach. The new freedom and openness is a freedom for nothing.

I think this comment is unduly harsh. We should not expect MOOCs to meet all educational needs. I believe they provide a very useful purpose. But I don’t see them as a replacement for formal education. I agree with Stephen: they are playing a different game. The question is more one of effectiveness than purpose. Are the current formal programs providing the skills and knowledge needed in the 21st century, and indeed to participate meaningfully in MOOCs and other forms of digital self-learning? And can they learn from MOOCs and how they operate?"

"Illich says, 'Curriculum has always been used to assign social rank.'(p.12). To him there is no question about it, this is a fact. Of course there is plenty of research published by now (see for example Pierre Bourdieu or Nils Christie) that indeed shows Illich`s notions being correct. 'Instead of equalizing chances, the school system has monopolized their distribution.' (p.12)

A second major illusion on which the school system rests is that most learning is the result of teaching."(p.12). This is hard for educators and systems administrators to swallow, even today, 40 years later. As a possible innovation Illich suggest "learning webs". According to him will this kind of good educational systems:

'provide access to available resources at any time in their lives; empower all who want to share what they know to find those who want to learn it from them; and, finally, furnish all who want to present an issue to the public with the opportunity to make their challenge known.' (p.75).

While being part of MOOC (massive open online courses), I know that Illich has got his dream come true. Even though there are minor drawbacks and some try their best to control and institutionalize, the realm of educational practices is shifting. People are taking more responsibility of their personal learning as well as teaching others. It is indeed happening.

Illich called this kind of process 'unschooling'. I would talk of networking and learning in networks, it is a parallel educational system that exist inside and outside of institutions. His book is worth attention, because he foresaw this new wave of education at the times when computers were just starting to emerge and global online learning communities were unimaginable for the most."