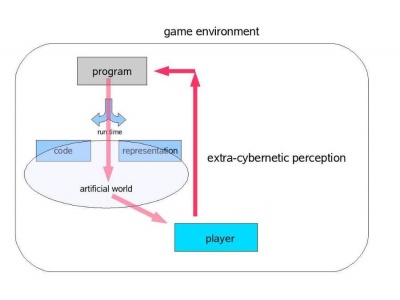 Nick Montfort - Toward a Theory of Interactive Fiction

Nick Montfort: Toward a Theory of Interactive Fiction

"A work of interactive fiction is, among other things, a computer program that accepts text input from a user and produces text output in reply. This user of an IF work is the interactor, following the terminology of the major academic effort in interactive fiction so far, the Oz Project; the term has been adopted by others {Murray 1995 p. 161}. It is synonymous with player as that term is usually used in the IF community, but player has other meanings related to games and drama while interactor has a history of being used only to refer to the person who interacts with an IF work. In the case of a work of IF that has no multimedia elements at all and uses only text for a medium, text simply refers to a string of words in the ordinary sense. However, text can also be considered semiotically to be any set of signifiers; thus IF works (and perhaps other works as well) that contain graphics, sound, or video can be accommodated in this way. Using text more specifically, to mean “strings of words,” interactive fiction indicates a category of text-based works, works that can contain other media elements but where text and textual exchange are central. Computer program could also be generalized to include other sorts of text machines in the broader Cybertext sense - written - out instructions that a person could follow, for instance, or Scott Adams mimicking Adventureland by uttering the output it would give in reply to someone’s spoken input."

"The interactor confronts the command line with neither obvious affordances nor a strict set of conventions for interaction, and must therefore guess how the hidden code might work in order to proceed. The framework for these guesses is what I term the “implied code,” defined as an interactor’s mental model of the operational logic of the interactive work. ‘Implied’ emphasizes both difference from the actual code and the emergence of the model as a co-construction, half expectations of the interactor, half implications of the text. When considered as a process in time, the formation of the implied code can generally be described as a coming-into-understanding. In contemporary literary IF, the interactor’s progress in learning to interact is often paralleled by the progress of the protagonist within the work, who also struggles to understand something within the world of the story. Implied code sets the pace of a dual epiphany that is both the climax and the conclusion: the character understands the world in the moment that the reader understands the code, and at that moment the work ends."

"The framework for these guesses is what I term the “implied code,” defined as an interactor’s mental model of the operational logic of the interactive work. As the interactor engages the IF work, she accumulates a set of hypotheses about its structure: what commands are understood, what actions are possible, what desirable states might lead to what resolutions, how far the scope of the simulation extends, and so forth. When I say that implied code models “operational logic” I mean a set of behaviors on the part of software, whether perceived by the user as tendencies, rules, or laws. For this reason the formation of an implied code is a normal (and largely unconscious) process for any interactor, regardless of her level of technical experience or sophistication. To possess an “implied code” does not require that the interactor be a skilled programmer with an aptitude for imagining precompiled syntax; in fact, the presence or absence of such imaginings is beside the point. The interactor may be somewhat inexperienced or totally computer illiterate, but regardless of her circumstances she will posses an implied code to the extent that she recognizes the code as a phenomenon in the normal manner outlined by behavioral, environmental, and situational psychology. As a set of expectations implied code is not strictly limited to interactive systems, but rather general to what we might call the phenomenology of software. In the case of IF, however, the predictive power of the implied code model is in particular focused on interaction, exemplified by the question 'How might my input be understood, and what type of response might I expect?'"

"Like the operational logic it is based on, implied code generally predicts structures and syntax of interaction rather than any specific content. For example, an IF interactor typing “> TALK TO CLAUDIUS” might have a strong expectation that the system will understand the action as speech (as opposed for example for assuming that the interactor is referring to an object named TALK that should be given to Claudius). In addition, the interactor might have a weak expectation that the system will respond with a speech act from the character addressed. Little can be expected, however, about what precisely will be said – at least, little that relates to one’s conception of the code. Expectations about how it would be appropriate for the protagonist’s uncle to react at this point in the discourse are part of an entirely different order of knowledge from the implied code, which is concerned primarily with how the Claudius object may be affected in the simulation and what type of changes might result from a given action. Rather than “If I do A, the next story event will be B,” predictions take a form more similar to “If I input interaction A, then the parser will understand the input as of type X, and a change of type Y will occur.” Here we might describe implied codes cognitively in terms of schema theory; implied codes are in this sense particular kinds of schemata that map software behaviors. Because it is a mode of knowledge acquisition, implied code is usually in the process of forming, but may not develop during interactions that fail to map input to output due to inattention or confusion."

Michel Chaouli - How Interactive Can Fiction Be?

Michel Chaouli: How Interactive Can Fiction Be?

"Whether the move toward equality in social relations is hastened by liberating the signiﬁer can be debated, yet the prior step in the argument — that the lopsidedness of author and reader represents a tyranny to be abolished for the good of art — strikes me as erroneous. The opposite seems to me to hold: “interactivity” — high communicativity of any sort — interferes with the unfolding of literature, particularly with writing that means to lead us into ﬁctional worlds. Even the technically modest oral narrative demands a highly artiﬁcial communicative situation: someone speaks, and all others remain silent. Driven by a moral impetus that ﬁnds hierarchies of all kind anathema, many critics (particularly in the United States, where a robust suspicion of hierarchy is woven into the nation’s ideological DNA) have made it their charge to topple them wherever they might encounter them. In the process, they tend to ignore the fact that in order for art to occur, communication must be distributed unevenly: some narrate, write, dance, or sing, while others listen, read, or watch. The productive, and satisfying, side of this asymmetry reveals itself in the eagerness with which recipients willingly cede communication for the sake of the pleasures the narrative experience affords.

Not only aesthetic pleasure but critical engagement, too, paradoxically depends on shutting down (or at least severely diminishing) the return channel of communication, for only when participants are released from the labor of constructing a text on a material or topological level (becoming “passive recipients” in that respect) can they become hermeneutically active and think their own thoughts about what they are reading, seeing, or hearing. Friedrich Schlegel’s ideal reader, the template of all critical readers to come, can only be imagined as 'not resting and dead, but alive and counteracting,” when on the level of inscriptions he or she does rest and refrain from acting.'"

"When in my role as the reader-user I am obliged to manipulate the text by choosing a link, I violate not the distinction of ﬁction and reality but rather the far more crucial copy of this distinction within ﬁction itself. For through my choice I intervene in the ﬁctional world, and I do so urged on by my real appetites and anxieties. Instead of extending the range of ﬁction to myself, my self advances into the ﬁction. In contrast with ritualized acts of reception (such as turning a page or circling a sculpture), when reading hyperﬁction I change the course of the narrative according to my own motivations, which may remain opaque to me. The moment a part of reality appears in its stark nonﬁctional form within ﬁction, the latent reference that ﬁction maintains to reality is interrupted, and the ﬁction itself begins to come apart."

"I admit that the question with which I began — the question of whether forms of ﬁction making might be able to make use of the communicative features of the networked computer — remains open, but these reﬂections may at least have narrowed the ﬁeld over which it can range. We can say this: there are two main shifts to which ﬁction (literary or otherwise) must adjust when it is communicated in a medium in which the recipient helps to assemble the system of inscriptions in topologically signiﬁcant ways. First, it needs to recognize that the role of the reader familiar to us from print changes in the degree to which the links between textual elements remain semantically underdetermined. Second, ﬁction somehow needs to manage the fact that the user’s navigational decisions can be driven by motives wholly divorced from the ﬁctional world, provoking a crisis of ﬁctionality. The ﬁctionalization of reception is one way of addressing both shifts, for a ﬁctionalized “interaction” would be severely limited by the boundaries of the ﬁction, thus rendering the ﬁctional world a larger, more complex, and more interesting space to inhabit.

If the examples for the sort of ﬁctionalization of reception I have in mind (MUDs and MOOs, various web-based writing games) are any indication of things to come, then the forms of ﬁction making we can expect to ﬁnd in the medium of the networked computer will have little in common with traditional notions of literature. The reason is quite simple: such games do not produce primarily readers but writers, and these writers do not write to be authors; what they put down is not meant to amuse or instruct other readers, rewarding them as readers, but meant rather to provoke them into becoming writers themselves (by contributing to the writing game, for instance)."