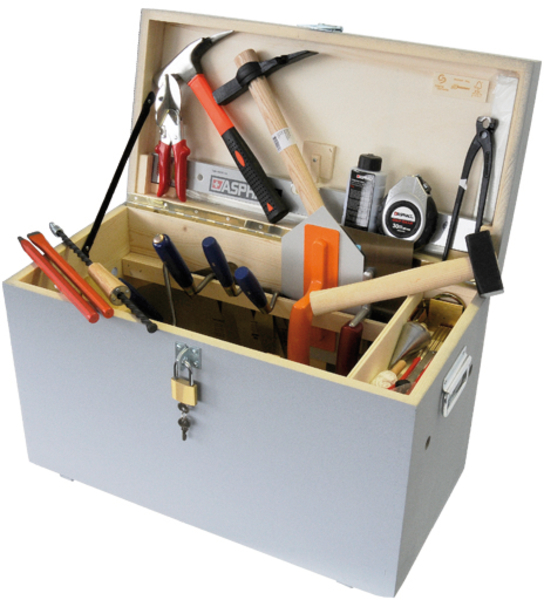 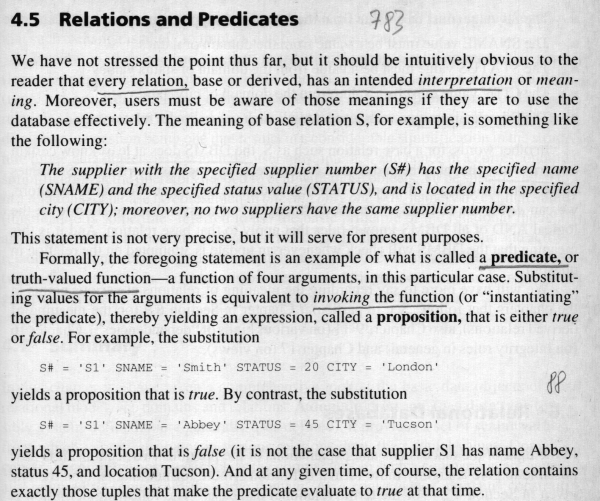 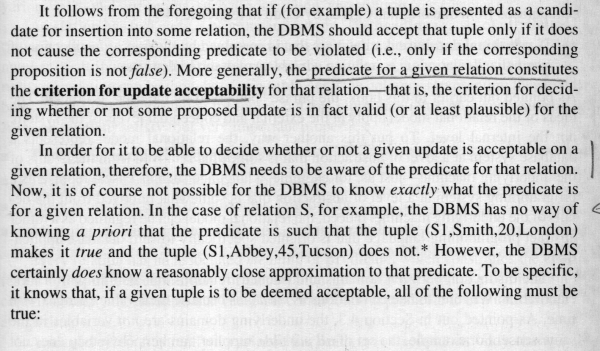 "the philosophy department's down the hallway"

Exzerpte aus Hugh Darwen: What a Databasde really is: Predicates and Propositions

Hello. Let me introduce myself. My name is Hugh Darwen, and I am the tutor (staff number 44525) in region 4 for certain students on course M358, which is entitled Relational Databases.

How do we distinguish statements of fact from other kinds of sentences, such as greetings, imperatives, and questions? Well, here's another example that might help:

I am writing this article in my study at home in Warwickshire on February 9th,1997.

Now, you cannot tell whether what I've just told you is a true statement of fact or a false one, but you do know, from its very form, that it is either true or false. By contrast, we cannot say of utterances such as "Hello," "Let me introduce myself," or "What's the time?" that they must be either true or false.

A DATABASE IS A SET OF TRUE PROPOSITIONS

It's useful to view a database as representing a set of propositions (assumed to be true ones) concerning some enterprise of which the database is supposed to provide some kind of record (I'm using the term record here in its generic sense, not the special sense in which it's often used in computer contexts—in database contexts in particular). If we do take that view, there are some important questions that immediately arise:

It's predicates that have made databases, database management, and database queries tractable to computerization. Consider once again the proposition from my opening paragraph, which I'll now restate in a very slightly different way:

Hugh Darwen is the name of a tutor (staff number 44525) in region 4 for certain students on course M358, which is entitled Relational Databases.

It's easy to see that this statement has a certain form that could be common to a whole set of propositions one might wish to state in some record of the enterprise called the Open University.

Here's what is probably the most general form of the original proposition that we might all agree on:

And that's a predicate!