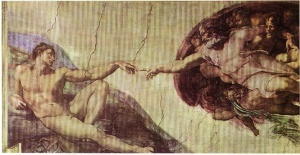 Cyberspace is more than a breakthrough in electronic media or in computer interface design. With its virtual environments and simulated worlds, cyberspace is a metaphysical laboratory, a tool for examining our very sense of reality.

Only a short philosophical step separates this Platonic notion of knowledge from the matrix of cyberspace entities. (The word matrix, of course, stems from the Latin for "mother," the generative-erotic origin). A short step in fundamental assumptions, however, can take centuries, especially if the step needs hardware support. The hardware for implementing Platonically formalized knowledge took centuries. Underneath, though, runs an ontological continuity, connecting the Platonic knowledge of ideal forms to the information systems of the matrix. Both approaches to cognition first extend and then renounce the physical embodiment of knowledge. In both, Eros inspires humans to outrun the drag of the "meat" -- the flesh -- by attaching human attention to what formally attracts the mind. As Platonists and Gnostics down through the ages have insisted, Eros guides us to Logos.

The erotic drive, however, as Plato saw it, needs education to attain its fulfillment. Left on its own, Eros naturally goes astray on any number of tangents, most of which come from sensory stimuli. In the Republic, Plato tells the well-known story of the Cave in which people caught in the prison of everyday life learn to love the fleeting, shadowy illusions projected on the walls of the dungeon of the flesh. With their attention forcibly fixed on the shadowy moving images cast by a flickering physical fire, the prisoners passively take sensory objects to be the highest and most interesting realities. Only later, when the prisoners manage to get free of their corporeal shackles, do they ascend to the realm of active thought, where they enjoy the shockingly clear vision of real things, things present not to the physical eyes but to the mind's eye. Only by actively processing things through mental logic, according to Plato, do we move into the upper air of reliable truth, which is also a lofty realm of intellectual beauty stripped of the imprecise impressions of the senses. Thus the liberation from the Cave requires a reeducation of human desires and interests. It entails a realization that what attracts us in the sensory world is no more than an outer projection of ideas we can find within us. Education must redirect desire toward the formally defined, logical aspects of things. Properly trained, love guides the mind to the well-formed, mental aspects of things.

Cyberspace is Platonism as a working product. The cybernaut seated before us, strapped into sensory-input devices, appears to be, and is indeed, lost to this world. Suspended in computer space, the cybernaut leaves the prison of the body and emerges in a world of digital sensation.

This Platonism is thoroughly modern, however. Instead of emerging in a sensationless world of pure concepts, the cybernaut moves among entities that are well formed in a special sense. The spatial objects of cyberspace proceed from the constructs of Platonic imagination not in the same sense that perfect solids or ideal numbers are Platonic constructs, but in the sense that inFORMation in cyberspace inherits the beauty of Platonic FORMS. The computer recycles ancient Platonism by injecting the ideal content of cognition with empirical specifics. Computerized representation of knowledge, then, is not the direct mental insight fostered by Platonism. The computer clothes the details of empirical experience so that they seem to share the ideality of the stable knowledge of the Forms. The mathematical machine uses a digital mold to reconstitute the mass of empirical material so that human consciousness can enjoy an integrity in the empirical data that would never have been possible before computers. The notion of ideal Forms in early Platonism has the allure of a perfect dream. But the ancient dream remained airy, a landscape of genera and generalities, until the hardware of information retrieval came to support the mind's quest for knowledge. Now, with the support of the electronic matrix, the dream can incorporate the smallest details of here-and-now existence. With an electronic infrastructure, the dream of perfect FORMS becomes the dream of inFORMation.

Filtered through the computer matrix, all reality becomes patterns of information. When reality becomes indistinguishable from information, then even Eros fits the schemes of binary communication. Bodily sex appears to be no more than an exchange of signal blips on the genetic corporeal network. Further, the erotic-generative source of formal idealism becomes subject to the laws of information management. Just as the later Taoists of ancient China created a yin-yang cosmology that encompassed sex, cooking, weather, painting, architecture, martial arts, and the like, so too the computer culture interprets all knowable reality as transmissible information.

Hans Moravec has a dream. A roboticist at Carnegie-Mellon University, Moravec wants to download the information stored in the human brain and transfer it to a computer. In his view information is information, whether stored in silicon-based hardware, disk software, or cranial wetware. Once the transfer is complete, the body becomes disposable, an outmoded artifact to be discarded along with the limitations of space and time that it necessitated. Moravec is not crazy: he is head of Carnegie-Mellon's Mobile Robot Laboratory. And he is not alone. His dream is shared by many others, appearing with variations in fields as diverse as cryogenics, genetic engineering, and nanotechnology. Ed Regis has identified this dream as the "desire for perfect knowledge and total power. The goal [is] complete omnipotence: the power to remake humanity, earth, the universe at large. If you're tired of the ills of the flesh, then get rid of the flesh: we can do that now."'

Perhaps not since the Middle Ages has the fantasy of leaving the body behind been so widely dispersed through the population, and never has it been so strongly linked with existing technologies. The conjunction with technology is crucial. In its contemporary formulation, the point is not merely to let the technologies splice a human subject into a cybernetic circuit by putting the human sensorium in a direct feedback loop with computer data banks. VR breaks the barrier of the screen, opening the high-dimensional space beyond to sensory as well as cognitive habitation by the user. With VR you don't just see data banks; you can sit down on them and watch the river of information flow by. Or you can plunge into the river. Turning Heraclitus on his head, Michel Serres has asserted that flows are more constant than the material world that expresses and embodies them. The river remains the same, while the banks constantly erode and change. Body cells change and die; it is the flow of energy and information through the organism that maintains continuity. No man steps twice into the same river not because the river changes, but because he does. These inversions are consistent with virtual reality, for they figure the flow of information within systems as more determinative of identity than the materiality of physical structures. Plunging into the river of information implies recognizing that you are the river.

Baudrillard has written about the implosion of cultural space that takes place when the copy no longer refers to an original but only to another copy. Defining a simulacrum as a copy with no original, Baudrillard imagines a precession of simulacra (precession is a mathematical term denoting the gyration of a sphere when spinning under torque, as when a top slows down and begins to wobble). The spinning metaphor is appropriate, for in the circular dynamic in which copy replaces copy until all vestige of the original is lost, reference is supplanted by reflexivity. Virtual reality exemplifies the implosion Baudrillard describes. When the technologically enhanced body is joined in a sensory feedback loop with the simulacrum that lives in RAM, it is impossible to locate an originary source for experience and sensation. The "natural" body, unmodified by technology, is displaced by a cybernetic construct that consists of body-plus-equipment-plus-computer-plus-simulation.

The juxtaposition of eroticism, violated taboos, and modified bodies helps to explain why the high-tech world of the cyborg should so frequently take on a Gothic tinge. In Vernon Vinge's "True Names" (1981), often identified as the original cyberspace story, castles and dragons populate the landscape of the Other Planet, a consensual space created when humans strap on electrodes to interface with each other and artificial intelligences through computer networks. Once on the Other Planet, the user's consciousness is manifested through what-ever form he or she desires. One appears as a beautiful red-haired woman; another as a typewriter. The Gothic landscape and creatures that surround these forms are more than quaint anachronisms. Rather, they serve as tropes that map complex cultural formations onto the technomorphisms unique to the twentieth century.